Do you want to spend the rest of your married life arguing with your spouse? You can be the one to stop a bad pattern and create a better one. If you are secure if enough, you can stop arguing and start building your relationship.

Did your parents try to fix relationship problems by arguing?  If so, you are also likely to argue with your spouse.  We learn to do what we see others doing, even when those things are destructive.  They make sense to us at the time, but make us regret our actions later on.  Arguing is one of the most deadly things that we can do for our relationships.  Trying to improve your relationship by arguing is like trying to dig your way out of a hole.  The more you argue, the worse your relationship will become.  Many of my clients have learned to stop arguing in their marriages and to focus on building similarities and connections.  Years of conflict can be completely turned around within a few weeks using methods that connect rather than disconnect.

In a debate, each person presents their viewpoint along with reasoning, examples, and evidence, if they have any.   Because there is no judge in these one on one debates, there is no way of actually deciding a winner.  Each person becomes more convinced by their own arguments and the more strongly they argue them, the more difficult it is to give them up. One person may then start to make power moves to try to force submission from the other.

Threatening to divorce or break up

One power play that some people make is being loud.  This can cause shut down in the other partner or one’s partner can also get loud.  The monkey which screeches the loudest may win simply because the other monkeys are afraid of his or her going bezerk.  For people who have partners that do the screeching monkey, they will know exactly what I am talking about.  This screeching contest can escalate to physical violence.

If I can’t win my point in an argument with you, I may start to list other issues and criticisms.  I can remind you of all the poor decisions you made in the past and how that led to a great number of problems.  In marriage coaching jargon, this is known as bringing out the laundry list.  You, as my debate partner, can then defend and argue about those additional issues from the past, bring in your own laundry list to use against me, or do the screeching monkey to try to shut me up.  If I were losing the argument, shutting you up may have been the goal that I was really hoping for.  I will have had a victory simply by preventing you from winning.

If I run out of ammunition or are overwhelmed by your logic, I am not likely to agree.  What I am likely to do is to withdraw. Even if my partner wants to continue to debate, I won’t participate and the argument comes to an end.  I can then use my withdrawal to punish my partner for arguing with me in the first place.  Arguing is always about winning or losing.  Being right or being wrong.  It is never about connecting.  If you are in the argument-withdrawal cycle, you will understand how this sucks all the joy out of your marriage.

One possible bad way to stop arguing is to surrender your position.

This does not happen by one person saying, “Wow, what you have said really makes sense.  I’m sorry I argued about it.  Let’s do it your way.”  Instead, surrender typically results in some kind of strained agreement, underlying resentment, and possibly with tearfulness.  If one’s partner is sensitive enough, the tears can even be used as an additional tactic to win the argument.  Such a tactic becomes less and less effective the more it’s used, however.  Your partner will eventually get to the point where your tears just make him or her angry.  You will start to see contempt in your partner’s eyes and on his or her face at that time. You may be surprised to learn that I do not teach my clients to make surrender, make apologies or to make promises.  While these do appease the other person, sometimes, they do not create connection.

These needs are not actually productive.  In fact, defending and needing others to agree are signs of neediness and insecurity.  As long as I live in a way that I believe is right, I do not need to explain myself to you, prove myself to you, nor get your agreement.  Not only that, but I can admit to the truth about what you are saying.  I can make you feel good about your ideas while still feeling good about mine.  I don’t need my wife to be just like me in order to love her just the way she is.  I am secure, and she is secure, and we love each other very much.

Boundaries and connection are the replacement for arguing

Will arguing with your spouse about whether he or she should criticize and demean you actually stop this problem and bring you closer?  Not at all.  Will walking away as soon as your partner start to criticize and demean you stop this problem?  Yes it will.  Will holding a grudge for days get your relationship back on track?  No it won’t.  Will going right back to interacting positively with your partner after following through with your boundary get your relationship back on track?  Yes it will.  Connection and boundaries are what good parents do with their children and what good spouses do with each other.

Become secure and powerful and loving

After working with me, my clients can no longer be provoked by criticism, no longer be sucked into an argument, no longer need to give in when don’t agree, and no longer feel like victims.  They feel for the first time like they are doing the most important things for building their relationships and preventing more damage.  You can have the power to attract your spouse again, to stop arguing, and to grow in ways that make you healthier and happier.  You don’t need to give up on your marriage to do this.  You learn to take control of yourself instead.  Work with me and we will stop the arguing in your relationship and restore the connection that you used to have. 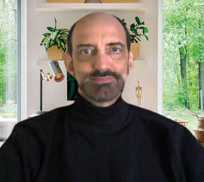 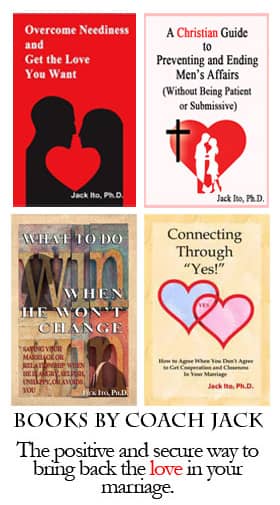